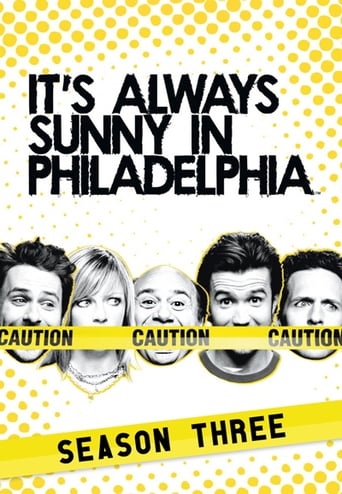 It's Always Sunny in Philadelphia - Seizoen 3

It's Always Sunny in Philadelphia is an American sitcom that premiered on FX on August 4, 2005. New episodes continue to air on FX, with reruns playing on Comedy Central, general broadcast syndication, and WGN America—the first cable-to-cable syndication deal for a sitcom. The show was created, developed, and produced by Rob McElhenney, Glenn Howerton, and Charlie Day, all of whom star in the show. The series follows the exploits of "The Gang", a group of self-centered friends who run Paddy's Pub, a relatively unsuccessful Irish bar in South Philadelphia, Pennsylvania. On March 28, 2013, FX renewed the show for a tenth season, and announced that the series will move to new sister network, FXX. The 9th season premiered on Wednesday, September 4, 2013 at 10pm.